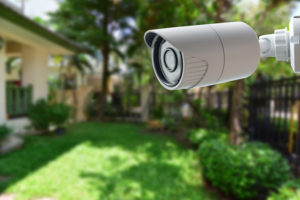 You don’t want to discover the morning after an incident at your premises that the images from your CCTV are unusable. More often than not, bad security camera footage is the result of poor lighting. Here’s our top 10 tips to getting this fixed.

1. For clear images, use lots of light

There’s no getting away from it. Even with the latest digital cameras, CCTV needs lots of light to be effective, so you’ll need to decide if you’re serious about CCTV and getting the right lighting for it. Remember, lighting is based on the inverse square rule: if you double the distance to the subject being lit, you need FOUR times the original light. If you want CCTV for identifying criminal suspects, you’ll need to design it for such.

The majority of areas into which CCTV is introduced have been designed with horizontal illumination. Horizontal illumination puts dark shadows on people, and the faces of subjects wearing hats and hoods can often be totally dark. Instead, strongly consider mounting additional luminaires at face height – typically 1.6m. You need to think like a photographer, not a lighting engineer!

3. Be careful where you mount the lights

The luminaires illuminating the target space should be behind the camera, and pointing roughly in the same direction. Additionally lighting should be used to create an evenly-lit scene in the camera’s field of view, as this will ensure they are no areas of the image that are too dark or washed out. Cameras with built-in lighting – usually a ‘necklace’ of LEDs around the lens – can be effective but avoid cheap units.

4. Don’t fall into the silhouette trap

Probably the most common error with CCTV is silhouetting of the subject. If a camera is facing in the direction of the sun, or towards a brightly-lit shop window or street lights, the subject will be too dark for any features to be properly distinguished. To eliminate silhouetting, you need to think carefully about the number and siting of cameras – both during the day and the night – and ensure adequate lighting.

5. Get the colour rendering right

First off, if the surveillance scene has high-pressure sodium lighting, or even worse, low-pressure sodium llighting, consider replacing it as you don’t get true colours under these technologies. White LED lighting has been a boon to the CCTV industry, but don’t be complacent. It’s recommended that the colour rendering index, or CRI, of you lighting should be over 80. Further, many CCTV manufacturers recommend cool colour temperatures, typically 5000K.

A camera manufacturer may state in their data sheets that it can operate satisfactorily with scene illumination of just 1lx on the subject. It won’t, because their definition of satisfactory footage isn’t yours. To compensate for issues such as automatic lenses, gain control and signal noise, you need to provide more light they suggest. Remember too that outdoor scenes, such as a loading yards, often have very little or no reflectance compared to, say, an office interior.

7. Measure light at the subject not on the horizontal surfaces

Forget everything you know about light levels – you need to measure light the way a photographer would, that is, at the subject’s face. You should be aiming to achieve 30 lx from the floor level measured vertically. This can be quite hard to achieve in practice, but 20 to 30 could be acceptable depending on the circumstances. Don’t try to achieve this with just one light – use at least two get some facial modelling.

To identify a person for evidence that will stand up in court, the Home Office requires that for traditional PAL-based CCTV systems, a person of average height needs to fill the full height of the screen, and show their face. Not only that, but the lighting needs to be sufficient for an operator to be able to identify two faces from a standard chart of 12 racial groups in 30 seconds.

9. Be wary of motion blur

Specialist integrating cameras can work with lower light levels because they can put together a sequence of images – but the problem here is motion blur. If the subject – a car or a person – is moving you won’t get a clear view of their face or the car’s numberplate. The longer the integration the worse the blur. Cameras with infra-red lights and sensors can operate in low light, but you’ll only get monochrome footage.

During security incidents, mains power can become unavailable, so you’ll need to consider carefully how the camera will work in these circumstances. Additionally, in a mains failure you may have emergency lighting on the scene, but remember under BS 5266-1: 2016 you’ll get a mere 0.5 lx, which will be terrible for CCTV, so if it’s a critical area, you’ll need consider some form of back-up for the lighting or using a camera with integral lights.